I'm Terry Morgan and TJM Books is my self-publishing platform.
I started writing stories and poetry while traveling with my own exporting business.
Having visited well over seventy countries - some so many times I lost count - I now try, whenever possible, to give hotels and airports a miss and live with my Thai wife, Yung, in the quietness of rural Petchabun, Thailand.
We still return home to Gloucestershire and the Cotswolds valleys in the UK occasionally, but all that lonely business travel - to Africa, the Middle East, the Far East, across Europe and America - did give me something quite special. Many of my memories and personal experiences find themselves - together with a lot of imagination - in what I now write about. So, it's mostly international and covers business, politics, terrorism, crime and espionage plus a lot of science thrown in because I'm still a biologist in my heart.  Mostly it's serious but sometimes satirical and I especially try to write enjoyable reading for that largely under-catered for part of the population - mature men.
And you'll get your money's worth because most of my books are well above average in length and the e-versions are free.

CURRENT WRITING PROJECTS:
​I've always run two, three or even four writing projects together - putting aside one to focus on another for a while, then reverting.  These are two of my current ones.​

​'THE MOSQUITO CONSPIRACY'
The fifth in the "Asher & Asher" series
An ex United Nations Biological Weapons Inspector comes out of forced retirement to pursue a suspicion of a secret project that would enable genetically modified flies to carry deadly viruses. But can he prove his suspicions before becoming a target for state or private security forces? And is there more to it than flying insects?
That was the original idea of this story and it's still the main theme - politicians and government-led security forces are not unknown to have dealt with UN weapons inspectors if they step out of line against their wishes!
In 2020 I put this story aside for a while to focus on "Bad Boys" and to watch emerging technology as it was moving rapidly in the direction this story was heading.
Then along came COVID and so much of what this and my other book, The Malthus Pandemic, was about started to come true.
Foresight or what?
Whoever thought 'Gain of Function' research would become a topic for discussion in the US Senate and general discussion in the media, but it has.
In late 2021 I restarted the novel. In came a quiet young American engineer called Carlos Garcia with a hidden flair for criminal investigation. Not quite knowing where stories will go when I start out has been the hallmark of eerything I've so far written!
But I have always written about things that are perfectly feasible and with ongoing questions about the origin of lethal Coronaviruses, the continued risks of "gain of function" research and the growing interest by some countries in biological agents as weapons this story not only taxed my bioogical background but was very timely.
In February 2022 I put it on hold again as, once more, science and world events started to overtake where this piece of fiction was heading.
As of April 2022 I'm back on it with a target finish date of mid 2022.

5 Star Review 31 May 2022:
Riveting. Yes, a bit hard to get into in the first few pages, but well worth the determination to read. Although fiction, there are semblances of truth in the book. Very well done.in
​

Greece and Northern Cyprus, three private detectives with personal problems, a computer hacker working from his bedroom and a Greek teenager. Can they work together to claim a million dollar reward for finding the ring-leaders of an international crime syndicate making billions from fake Indian jewellery and property scams? Or is the reward also a scam?

This story began as 'Death of a Skip Chaser' but things evolve as I write. 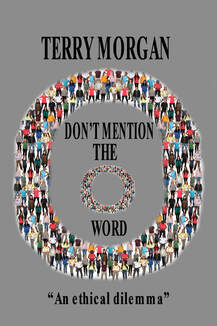 Don't Mention the O Word
​The background to this book was a request in August 2021 to write a chapter for a book on bioethics and planetary health to be published by Prof. Darryl Mercer & Dr. Alex Waller during 2022.
It put a temporary halt to finishing the novels mentioned above.
What is it about?
If you ask what are the most obvious planetary health issues of 2021/22 you will, generally speaking, get a list of seven overlapping problems. Third world debt and globalisation
Degradation of the natural environment and biodiversity loss
Climate change and global warming
Food and water shortages and resource depletion
Unemployment and economic migration
Conflict, ethnic tension and refugees.
And how many organisations exist to address the problems listed above? The answer is probably thousands: big and small and mostly publicly funded organisations and charities.
The chapter discusses what I consider to be the single, basic cause of each of the seven problems and to identify inherent and long-standing weaknesses in political leadership and key organisations like the UN and the WHO which make solving world health problems an almost impossible task.
E versions were published on Smashwords and Amazon Kindle in January 2022.
Amazon Kindle: ASIN: B09QBZSXFK
Smashwords: https://www.smashwords.com/books/view/1126407

REVIEWS:
(July 2022) Congratulations on the 'O Word'.  I thought it was clear and very readable – though some of the stats and graphs went over my head!!  Enormous amount of research. I agree with and get it completely and it is the Elephant in the Room that no politician or the media will talk about. Great cover as well.
​
​(August 2022)  Brilliant! I found it so interesting. Re-reading it was a treat each time.  Its currently out on loan to a friend, who having read it a second time is keen to give copies to friends. I need more copies!

www.tjmbooks.com is the property of Terry Morgan.
This website, content and images are protected by copyright through:
Protect My Work Ltd, Kemp House, 152 City Road, London, EC1V 2NX, UK
Compsny Registered in England & Wales No. 04358873